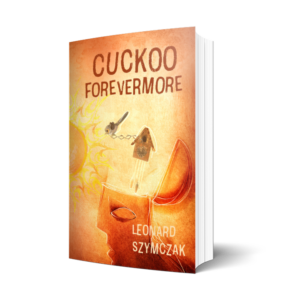 A cast of lunatics Down Under puts the “fun” back into dysfunctional in this sexy satire.

Dr. Peter Pinowski, approaching the big 30, still lives with his neurotic Polish Parents. In his first job at a children’s psychiatric department of a Sydney hospital, he finds paranoids, perverts, and pandemonium, not from the patients but from the staff.

This revised edition of Cuckoo Forevermore offers a new forward and spiced up content. The characters are rivetingly strange and the dialogue is lovingly eccentric. Appealing and appalling, surprising and sexy, and always outrageously funny, Cuckoo Forevermore presents a shocking perspective on therapy. The sequel, Kookaburra’s Last Laugh, keeps the zaniness going forevermore.

“Cuckoo Forevermore is both a satire of the psychotherapy profession and the story of a man’s journey towards manhood. It is funny, accurate, probing, and enlightening. It shows the dark underbelly of the so-called therapeutic professions with humor and insight. It’s about time an insider blew the whistle on an industry that has its own special scams, frauds, and rogues.” Asa Baber, author of Naked at Gender Gap and former Men columnist, Playboy Magazine

“So the lunatics ARE in charge of the asylum – only we call them therapists. Uproarious shenanigans in a get-down Down Under version of the classic One Flew Over the Cuckoo’s Nest.” Patricia Monaghan, author of Magical Gardens: Cultivating Soil & Spirit

“Cuckoo Forevermore paints a provocative picture of the counseling profession in a way the public rarely sees. You may find the scenes shocking, disturbing, or even titillating; but one thing can be guaranteed, your preconceived ideas about therapists will never be the same.” Dr. Bernard St. George, Psychiatrist, Sydney, Australia